The ILSC delivers the $34 million SFM Program on behalf of the INPEX-operated Ichthys LNG Project’s voluntary commitments with the Northern Territory Government to offset carbon emissions from the project’s onshore facility.

Fires in tropical savanna, especially late in the dry season, account for more than 4 per cent of Australia’s greenhouse gas emissions. Not only do these fires release large quantities of greenhouse gases, they burn large areas of natural bushland and destroy biodiversity and cultural values. Managed fires in the early dry season can be used to prevent landscape-scale, destructive hot fires that often start each year from lightning strikes. 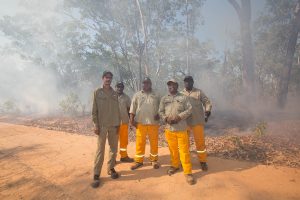 The end of the 2017-18 financial year saw an important milestone in the expansion of traditional Indigenous fire management in the Northern Territory as the Tiwi Island rangers, the first group to receive operational funds from the $34 million SFM Program, conducted early season burning to create healthier country.

Currently around a quarter of Traditional Owner groups across northern Australia participate in the carbon economy. The SFM Program assists with the significant start-up costs that can act as a barrier to establishment of new carbon projects.

It is estimated that by 2020 Indigenous carbon projects across northern Australia have the potential to abate over million tonnes of CO2 per annum, provide 600 to 1100 part-time or casual jobs for rangers and Indigenous land managers, and deliver significant environmental benefits.